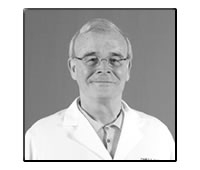 Founder and president of Renal Specialists of Houston (1975), Dr. Camilo Barcenas received his fellowship in nephrology from the University of Texas Southwestern in Dallas. He served for many years as Chief of Nephrology and Medical Director of Renal Transplantation at the Texas Heart Institute at St. Luke’s Episcopal Hospital, where he worked closely with Dr. Denton Cooley in the groundbreaking management of patients with combined heart and renal disease.

Dr. Barcenas is a visionary. He was one of the first to see the need for renal care outside of the Houston Medical Center, especially in underserved and tragically ignored regions of the city. Because of him, our practice serves a large and growing number of communities. Fluent in Spanish, Dr. Barcenas takes a leadership role in the management of Fresenius dialysis patients and serves as medical director of Sunnyside Dialysis Center and Southeast Kidney Center.